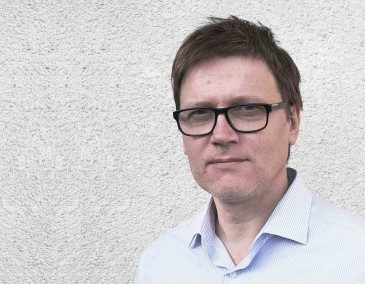 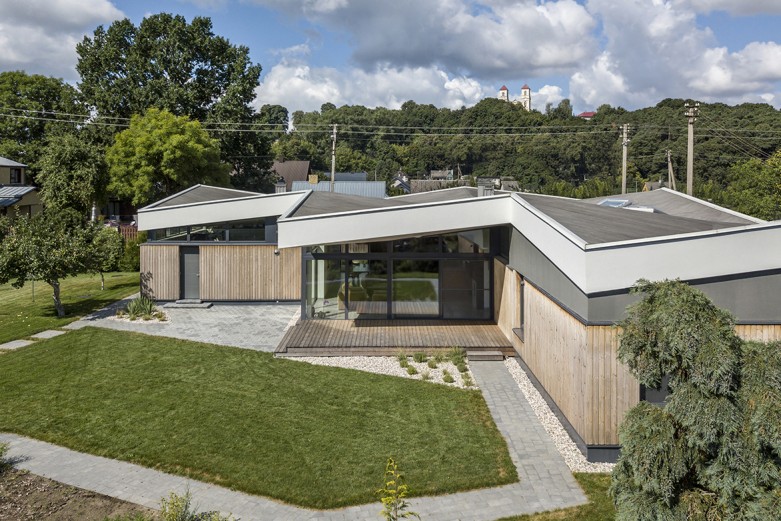 The architects were invited to design a new house for a family of four in Raudondvaris, in an old settlement located in the valley of the river Nevėžis. The clients lived in an old wooden cottage built on the edge of their piece of land. Existing housing did not meet the needs of the family, it was too small and not very comfortable. People did not want to leave the property, therefore decided to build a new, more spacious and modern house on the same piece of land.

Architects discussed the future visions with the clients and realized that there was the need for a comfortable one-storey house with a southern terrace, a garage for two cars and an outbuilding connected to the house. There was an interesting additional request, if it is possible to design the building so that the church towers standing on a hill in the distance will be seen through the windows. It was clear that it has to be high windows on the north side of the building to fulfill this request.

At the beginning of the design process, the architects assessed the situation of the project. The piece of land was in an old settlement, where main street was covered with ancient cobblestone. The road next to the land leads straight into the river Nevėžis and to the bridge remains which was built few centuries ago and played important role in the transportation until the II World War. Neighbourhood is surounded with the single storey houses with sloping roofs.

Architects set the goal to naturally and organically blend in the building into the urban fabric of the settlement, without destroying or bringing the disorder to the surroundings. At the same time, the building must be modern, with a distinctive architecture and character. This task turned out to be very interesting for the designers and challenged to create a residential house that would be original and exclusive in its architectural expression, and at the same time would fit into the existing old and traditional settlement.

Looking at the settlement from the bird‘s eye view and seeing the variety of sloping roofs, project architects came up with the idea to improvise with sloping roof shapes, which dictated the architectural expression of the origami roof house and architects came up with the idea of the funcional plan to cover the house with a direct folded roof. The roof in the interior and exterior is designed to be united and keeps the same shape inside and outside of the building, while simultaneously lifts off the walls as if it was flowing in the space. Having resolved this design solution, architects also fulfilled the additional clients request - the church towers became visible from any point of the interior.

The predominantly one-storey wooden architecture of the old town's urban fabric suggested the exterior decoration of the building. The facades of the house are covered with thermo-wood facade cladding. Selected dark gray anthracite color for window frames emphasizes and highlights the shape of a light folded roof. The layout of this residential house is divided into two main areas. The largest open space area is the living room, kitchen and dining room. A private area consisted of three bedrooms and two bathrooms is located on the left side of the entrance.

The family is very happy with the new house, the designed space and the functional architectural solution of the building, which fits well into the enviroment.